I haven’t posted for the last ten days so I have several workouts I need to catch you up on…the most important one being yesterday – but I’ll start in chronological order.

Planned workout = 4 miles alternating 4 min run/1 min walk.  As I’ve done so many times before, I started out too fast and I paid for it in the last two miles.  The overall pace wasn’t bad but clearly I need to do a better job of controlling my pace from beginning to end. 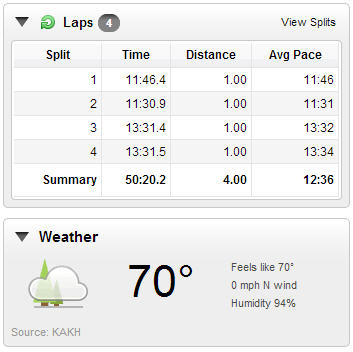 Planned workout = 36 minutes alternating 5 min run/1 min walk.  I made a concerted effort to start out a little slower so that I could maintain that pace throughout the run and I’m amazed that I actually achieved negative splits!! That’s a first for me…woohoo!

Planned workout = 36 minutes alternating 5 min run/1 min walk.  The humidity was just unbearable this morning so I decided to hop in the car and go to Anytime Fitness to run on the treadmill (at least I know my membership isn’t going to waste!!)  I started out with a pace of 5.2 mph and the last two intervals pushed it to 5.5 which gave me a great overall pace.

Planned workout = 7 miles alternating 4 min run/1 min walk.  Ok, so I have to admit I was a little worried about this distance since I’ve never run that far before (10K is my longest distance) but I was running with my buddies and they gave me the confidence boost I needed.  We decided in advance that we would take a break at the halfway mark and walk that 4 min run interval so we could eat our choice of energy food (I’m using Shot Bloks).

We mapped a route along the main road in town so there was a lot of traffic passing by which offered a much needed breeze as large trucks passed, lol.  The weather was overcast and although the humidity was up, it didn’t feel awful.  I knew that I needed to really pace myself if I hoped to finish the distance and I happened to stumble across an article about ‘junk miles’ which described me to a ‘T”.  Based on this information, I decided I was going to start out even slower than I did during the week – running at a conversational pace.  I quickly found, for me, that pace is somewhere around 13 min/mi.  I had to really focus for those first few miles to make sure I kept my pace around 13, however after that I fell into a rhythm.  During mile 4 I had my planned walk break and nutrition; during mile 6 I doubled back to run/walk with one of my buddies.  She was having a little difficulty so I walked a little while with her.  During mile 7 my left leg muscles were letting me know they were tired so I took a few extra walk breaks.

I’m so excited/impressed that I completed 7 miles!!  Based on the information in that article, running for longer distances at a slower pace will build up my endurance and I can tell you that I felt MUCH better after those 7 miles than I did after 4 miles the previous week.  I didn’t have to stop one time because I couldn’t catch my breath and I didn’t get overheated either!! Wow!  I’m so glad I stumbled across that article!! 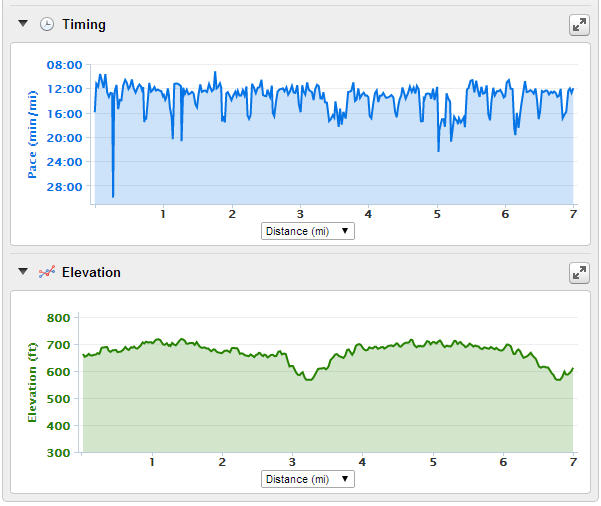 Posted in Random ThoughtsTagged half marathon, pace, runningLeave a comment