This past weekend was the longest run of my training program before the Half Marathon…12 miles! With just 11 days left before the race I think I’m as ready as I’ll ever be 🙂

For the 12 mile run we decided to drive a few miles to the next town where we could take a route with fewer hills; I think that helped quite a bit! Since the route we chose was only 6 miles out & back we had to run it twice…that added a new layer of difficulty.

The weather was perfect for our run, upper 50’s with sunshine. We started out around 8am and pretty quickly there was separation because we each have a different pace – I was bringing up the rear 🙂  I set the c25k app for run/walk intervals of 10min/2min as this is the interval I want to run in the HM. The first few miles went by pretty fast and when I reached the halfway mark I realized the route we chose was not exactly 3 miles up and 3 miles back, in fact it was about a .7 miles short which meant I would cover less than 11 miles instead of the 12 miles planned. I started thinking how I would add in that extra mileage. By  mile 10 I was feeling like I wanted to stop but I pressed on, when I passed our starting point @ 10.5 I saw the other ladies were already finished and I toyed with the idea of stopping but my OCD kicked in and wouldn’t let me.

I kept going until I hit 11.5 and then headed back to where the ladies were waiting. Yay! I was so excited that I finished the 12 miles but I was beat…when I reached the ladies they had already recovered from their run since I was about 20 minutes behind them. It was then I found out that they had in fact stopped at 10.5 miles – what? They were congratulating me for finishing but I couldn’t get over the fact that they had stopped short of our goal…if they had told me that when I passed them I would’ve stopped too. Ultimately I’m glad they didn’t, it’s nice to know that I can cover that distance which makes 13.1 feel quite attainable.

Our starting point just happened to be the parking lot of a Dunkin Donuts, I’m sure you can guess what we did after I recovered…yep, a big ol glazed donut and a vanilla chai coffee…YUM! 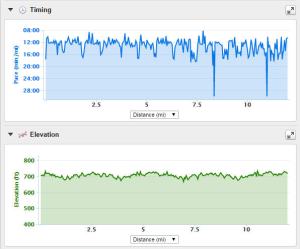 4 thoughts on “My new longest distance”