Not much quilting this week – I’m waiting to start a new commissioned t-shirt project because they’re sending more shirts. I have already ‘deconstructed’ the ones I have but I don’t want to play with the layout until I see what else I get so…they’re just patiently waiting in a nice pile 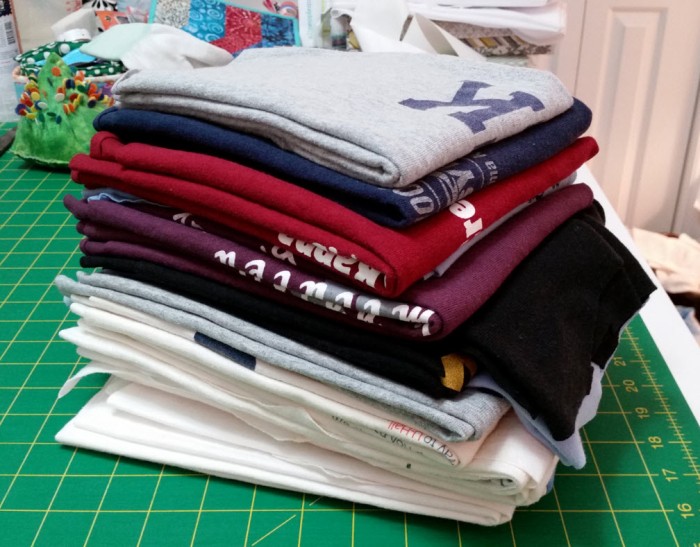 I did finally pull out a very old UFO…when I first started quilting I followed a 12 month Block of the Month sew along that another ‘new to quilting’ blogger was following. These blocks were some of the first I ever made and looking at them now I can see I’ve learned so much in the past three years!! Back then I didn’t know to ‘trim the dog ears’ or ‘square up my HST’ or how to keep my points when piecing blocks…I’ve had quite a laugh looking at these blocks. For quite some time I’ve been meaning to put this together and call it my “Learning Quilt” but I never got around to it – until now.

I decided to add sashing and borders in Kona Snow; the size of the sashing varied depending on the size of the block – ahem, no they’re not all the same size! It doesn’t look bad from distance and I’m really not worried about it anyway – it’s not like I’m going to sell it or gift it – this one is all mine 😀

I’m going to FMQ something different in each block – maybe following some of the piecing as suggestions and maybe not, lol. I got started on two blocks

But then my machine started making a funny sound – more specifically the feed dogs. I quickly realized there must be something wrong with the feed dog drop control because they won’t stay all the way down 😦 UGH! I’ve called the repair shop and I’m taking her in next week to see if they can fix it…I simply MUST be able to FMQ!!!

While I’m restricted from FMQ, I can still do straight stitching and piecing so that’s what I’m doing. I pulled out some blocks I made a last month and pieced them into a top. The pattern is called Triplicate from Patchwork Essentials: The Half-Square Triangle book by Jeni Baker 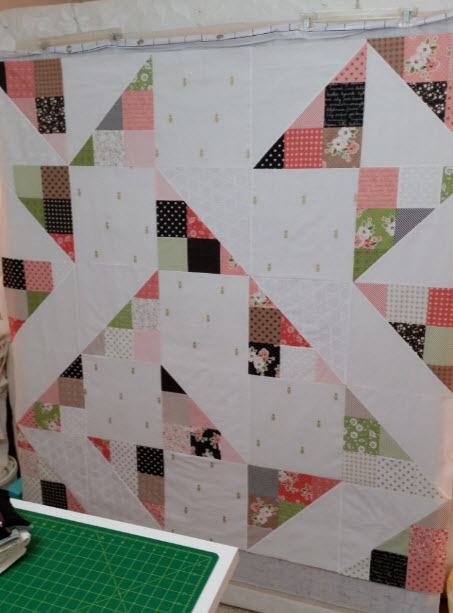 I didn’t follow her layout exactly but it’s pretty close. Those ‘dots’ on the solid white squares are actually little gold pineapples – so cute!!

That’s about all for now…what’s going on where you are?

Have a Happy Memorial Day!

One thought on “Sewing and waiting…”