I’ve been working on repairing a quilt for my niece (yes the same one that just had a baby!). When I went up for her baby shower she pulled out an old quilt made for her by my grandmother and asked if I could repair it. I’m so bummed that I didn’t take any ‘before’ pictures – ugh, what was I thinking?!!!

Here are a few pics after repairs, all basted with new backing – a twin size flat sheet. 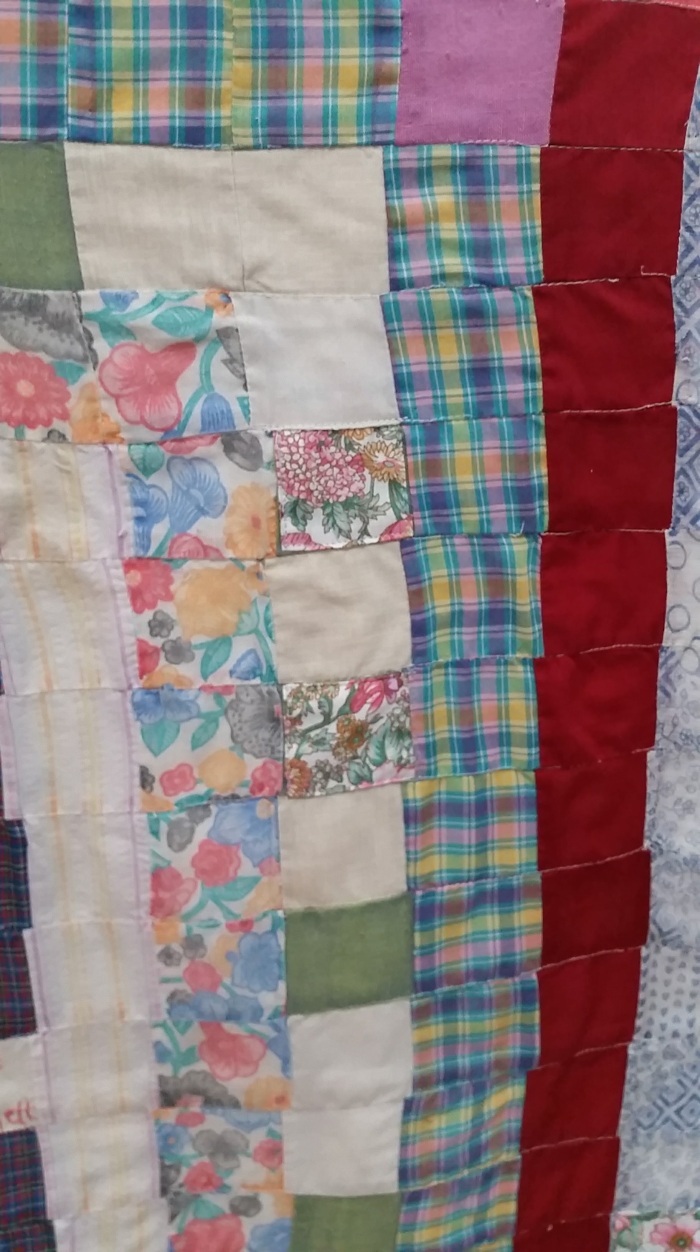 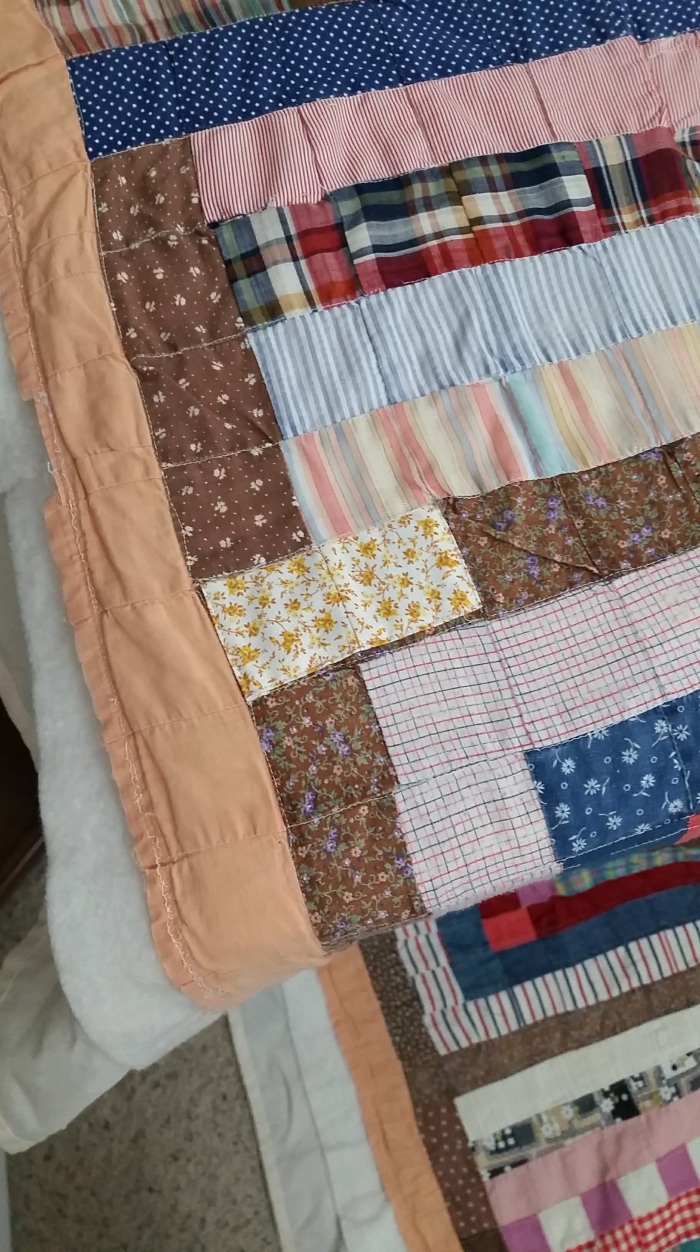 I have no idea how long it took my grand mother to make this or if she did it with a group of friends but it sure looks like more than one person worked on it. The original backing appeared to be a sheet so I did the same thing. She also chose to tie the front & back instead of overall quilting, and with years of use the batting got all balled up inside. That balled up batting plus the separating and fraying of the top made it pretty clear I’d have to take it apart to repair it properly.

Oh boy was that fun – NOT! I spent one whole evening just unpicking the binding and removing the ‘ties’; as I worked, balled up batting was falling out everywhere – what a mess! Once it was all apart and most of the batting removed, I started repairing the frayed and separated squares. I did not want to remove the frayed fabric for fear something else might fall apart so I placed new fabric squares over the old fabric and sewed it in place. I pre-washed the new fabric so it wouldn’t shrink later and pucker. Once all those spots were addressed I moved on to the areas where the stitching had come out and sewed those pieces back together.

Because of years of use, the top is no longer square and I’m not going to try to square it up because I’d need to cut into quite a bit of the outside row. Of course this means quilting and binding could be a bit of a bear! It’s a good thing I love my niece so much!!

That’s about all I’ve been working on this week. I’ve scheduled a trip up to see my new great-niece on 11/28 so I want to be sure this is finished so I can take this quilt with me. I think I’ll be getting another t-shirt quilt job – another one of my neighbors has reached out and asked if I can make one for her daughter who recently turned 10. She spent many years in gymnastics so I think there will be many shirts for that time period.

We’re still planning a move to Myrtle Beach although the timing has changed a bit. The builder has fallen behind and instead of the house being completed end of Sept (!) he’s now committed to end of the year. So much for enjoying the holidays in the new house! Oh well, there’s always next year 😀  Here are two pictures from last week, they’ve finally started putting the brick on. 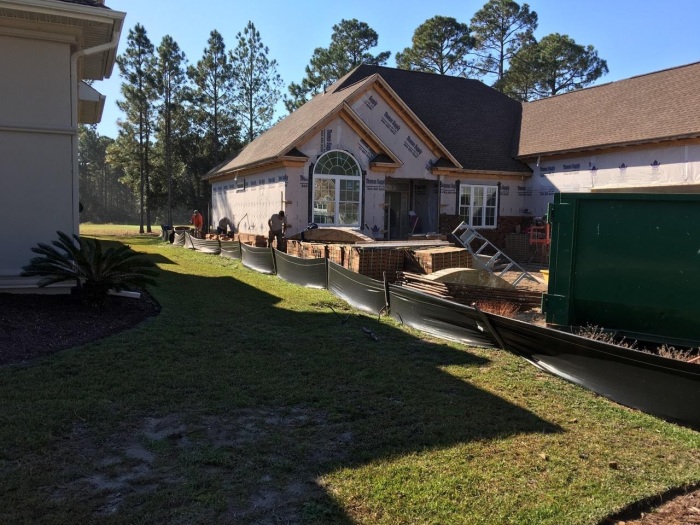 And that’s about all I’ve got going on right now…have a great Thanksgiving!!! ❤ 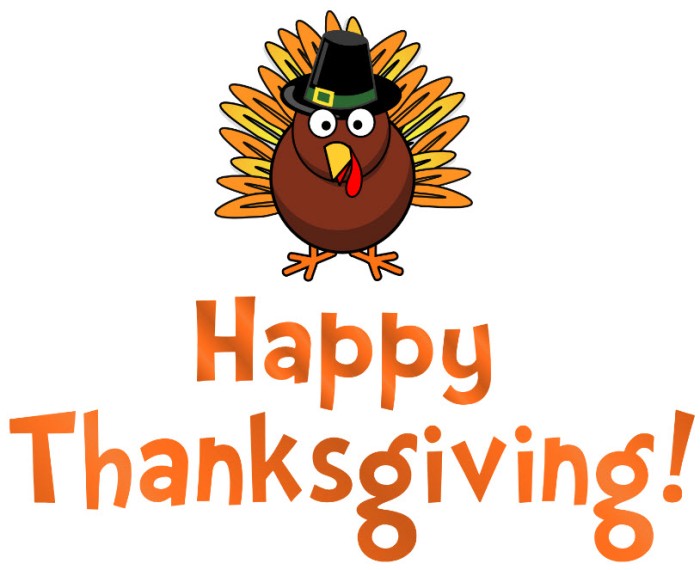 2 thoughts on “Repairing an old quilt”