After weeks of procrastination – I finally, FINALLY completed the memory quilt. Last Sunday I hunkered down and did the quilting and binding. None of it was hard, I just kept putting it off. This is a reinforcement that I need to STOP taking jobs for these kinds of quilts.

DH will be traveling back to the other house next weekend so he’ll take this back with him and meet up with the customer.

A few weeks ago I dropped a plate on the kitchen floor…it was a heavy Pfaltzgraff plate from a set I bought new for the house. It not only shattered but it chipped the side of one of the floor tiles UGH! Every time I walked into the kitchen I could see the dark brown spot where it was chipped so I decided I would get some fingernail polish at the Dollar Tree and see if I could make it blend in.

Other folks would’ve taken a ‘before’ picture but I was so excited to try this out I completely forgot!! Here are a few shots of ‘after’:

This first one from standing height, I’ve circled where the chip was 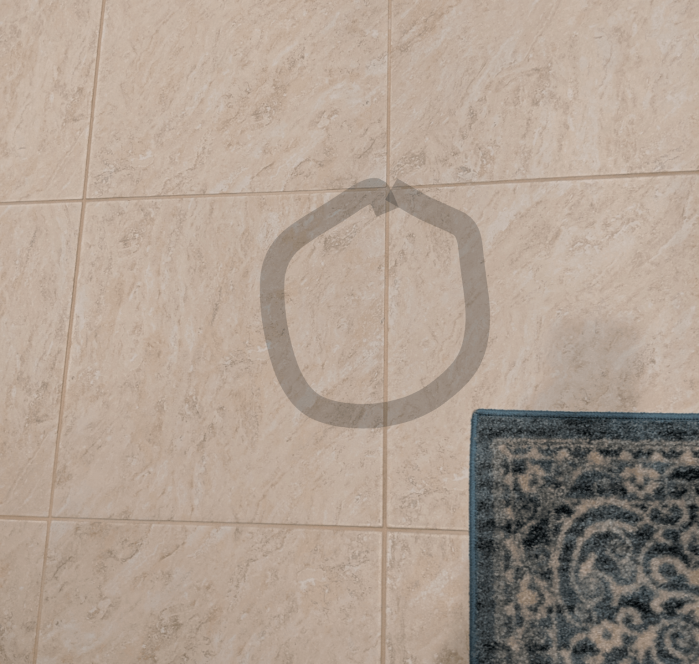 This second one is an extreme closeup

Yay! It worked!! I don’t even think about that darn chip anymore 🙂 And if any of the polish wears off over time I have plenty left to do another patch up.

After living here for a few months you’d think we would’ve walked the beach many many times by now… but no. We’ve eaten at waterfront restaurants but until last week we had not gotten our feet into the sand and into the ocean. Let’s hope it doesn’t take as long for it to happen again, LOL

We do not like to swim in the ocean so we spent the next day at our community pool. Most days there are no more than 5 people there 🙂

I dropped 1.4 at WW at this weeks’ weigh in 🙂 My running total so far is 9.4…I can definitely feel a difference in my clothes. The waist band on my pants isn’t choking me and my underarms aren’t getting pinched by my shirts :-p  I’m not having any issues following the points plan and I’m definitely eating a lot more fruits & veggies.

Today is the last day of the estate sale at our other house. I’m hoping most everything sells but DH will see for himself what’s left when he goes up next weekend. The estate sale company said they have dealers who may come and buy what’s left for a ‘lot’ price, that would be fine too.

That’s all for now…have a great rest of your weekend!